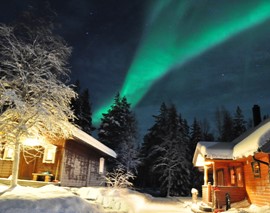 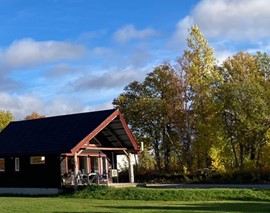 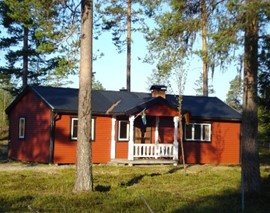 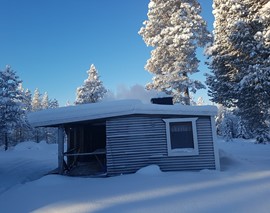 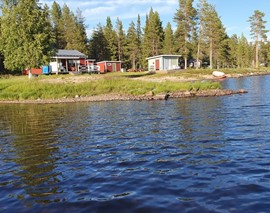 This cabin has today had 12 visitors! 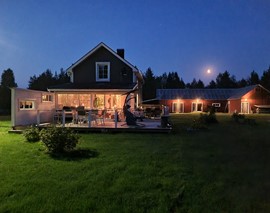 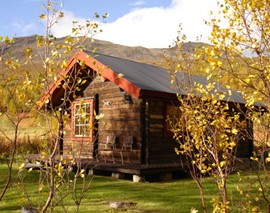 About Lappland in Sweden 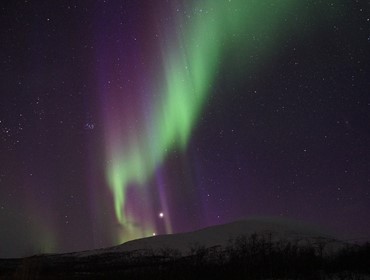 The province of Lapland, Sweden

If you are going to rent a cabin in Lapland, you will be staying in the northern inland of Sweden. Lapland borders Norway to the west, Jämtland and Ångermanland the south, Västerbotten to the southeast, Norrbotten to the east to, and the country of Finland to the northeast.

Lapland is Sweden's largest province and makes up around a quarter of the entire area of Sweden. Lapland is often called Europe's last wilderness, there is plenty of room for anyone seeking peace and quiet during their holiday.

Vacation in Lapland in the winter

Here are the Swedish winters at their longest, meter-high snow drifts, the magical northern lights and thick ice on lakes and rivers. The first ski resorts will open as early as October. During the winter, many wonderful holiday activities are offered such as dog sledding, snowmobiling and ice fishing. You should keep an eye out for reindeer when you drive to the cabin in Lapland. If you see reindeer tracks, you should slow down properly, it may be that there is a herd of reindeer in the middle of the road behind the next curve.

The Northern Lights in Sweden

Vacation in Lapland in the summer time

Lapland has an intense summer with the famous midnight sun. There is nothing more relaxing than watching the sun travel from day to night back to day again from the terrace of a cabin.

If you are renting a cabin in Swedish Lapland, you’ll be surrounded by endless untouched Swedish forests, dreamlike lakes and rippling waterfalls, here is also a rich flora & fauna that has adapted to the barren Lapland landscape. Do you want to pick berries on your vacation? In the west there are fantastic cloudberry marshes, tundra and mountains.

The colorful Jokkmokk market has been around since 1605. It starts every year on the first Thursday in February. If you rent a cabin during this period, you should definitely experience this folk festival. The market attracts 10,000s of visitors from all over the world every year. It is also the obvious meeting place for Sami tribes from all over Sápmi.

Lapland is the Sami kingdom in Sweden. The Sami are the oldest people in the Nordic countries, they have lived from hunting and fishing for millennia. Even today, many nomadic people live in tents and move with the reindeer in search of food. Duodji (Sami handicrafts) are sold as arts and crafts and are an important source of income alongside reindeer business.

Lapland invites you to many culinary experiences that often have their origins in Sami cuisine but also other 100-year-old cooking skills. The restaurants often offer exotic delicacies such as roe, snowdrop, cloudberries, rainbow trout and salmon. At local markets you can often buy food such as reindeer meat and moose sausage to set the table for a tasty feast in your cabin.

The ice hotel in Jukkasjärvi

In October, the annual construction of the famous ice hotel in Jukkasjärvi begins, one of the world's most famous hotels with cozy rooms, beds of ice, a cinema made of ice and the famous ICEBAR, where of course the glasses are also made of ice.

Big news for 2016, next to the classic ice hotel ICEHOTEL 365 is being built, a completely new ice experience that can be visited all year round. It is a permanent construction with an ice bar and an ice gallery. ICEHOTEL 365 is powered by solar energy during the bright summer months. ICEHOTEL 365 opens in November 2016. So now you can visit the ice hotel even when you are vacationing in the summer.

Day hikes on your stay in Sweden
Article

Are you interested in the Swedish nature? Day hiking is a perfect activity for you during your vacation in Sweden. Prepare a lunch bag in the cabin, pack a light backpack and set out for a day of nature exploring. Here you'll find 8 tips on popular hiking trails with hundreds of stages that you can make for nice day trips.